The Gardens at Spean Lodge

A professional gardener from Kew in London was employed to landscape the grounds in the mid-19th century. Evidence of formal Victorian flower beds and hebaceous borders still remain and there is an excellent photographic record of the grounds over a period of 130 years. In the 1890s a riverside path was laid – now truncated and overgrown – running from the Lodge to the ruins of 18th century High Bridge over a mile away.

Two acres of the original gardens remain, containing specimen trees which are protected by a general Tree Preservation Order. There are two lofty Californian redwoods (Wellingtonia) one of which was planted in the 1870s and a second in 1915 to commemorate the birth of a Davy child. Other fine species include cedar, copper beech, Douglas fir, Scots pine, Norway spruce, field maple, oak, lime and ancient holly trees.

May and June are the best months for admiring the mass of colour provided by the mature collection of rhododendron and azaleas. Enjoy the heady fragrance of azalea luteum and marvel at the giant scale of the rhododendron ponticum.

The Davy family and their house guests played a range of summer sports on these spacious lawns, including tennis, cricket, bowls and croquet. You and your family can now enjoy the space for badminton, ball games and golf pitch and putt. Best of all, just take a gentle stroll or relax on one of the many garden seats.

Autumn introduces a different colour palette as the trees glow with russet and golden brown foliage and the lawns erupt with a profusion of fascinating fungi.

Wildlife in the Gardens. The woodland character of the gardens and their sheltered position above the River Spean attract much birdlife. Finches and tits abound, and the many other species include pied wagtails, tree creepers, waxwing, collared doves, great spotted woodpeckers and hooded crows. The river is home to dippers, visiting black throated divers, and fish life includes brown trout and salmon.

Perhaps our most unusual guests have been a young Manx shearwater and a very confused guillemot both of which were blown inland by gales. Pine marten make spring appearances and enjoy jam and peanut butter sandwiches. We’ve also had autumn visits from foraging red squirrels. You can even occasionally spot a playful otter down on the rocky river bank. Voles, field mice and shrews are abundant – which probably explains why we also have resident tawny owls. 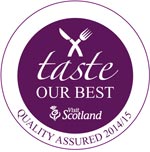